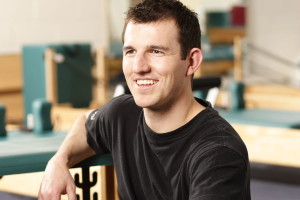 Bruce’s keen love of sports and movement began at a young age. His interests led him to a sports science program at RMIT Melbourne, and he graduated with a Bachelor of Science in Human Movement in 1997. He then traveled to the UK in 1999 and trained in Pilates with Body Control Pilates UK (BCP-UK). He went on to work in the BCP-UK central London studio alongside some of their most experienced training teachers.

Bruce’s enthusiasm for Pilates led him to train with teachers from around the world, including Siri Dharma from Los Angeles and Michael Miller from Colorado. In 2002, Bruce began to study with world-renowned movement and imagery expert Eric Franklin. Bruce went on to complete the full Franklin Method certification, and was the pioneer Franklin Method® Educator in Australia in 2004.

In 2003 Bruce was invited to manage the first BCP-UK studio in Scotland, where he worked with members of UK rock band Radiohead and members of the cast of Disney’s Beauty and the Beast.

Bruce was the co-founder of Balance & Control Pilates Studio in Melbourne in 2004. Balance & Control grew to three studios and a team of 20 Pilates and Physiotherapy practitioners over 15 years of operations, priding itself on each sharing a passion for movement, exercise, and rehabilitation.

Bruce has participated in a wide range of sports including tennis, cricket, baseball, and athletics, with his highest achievements being in AFL football. He was vice-captain of the VFL Under 19 representative team in 1995, and played at this state level for 4 years in the Victoria Football League and the Western Australia Football League. Bruce trekked the Inca Trail to Macchu Pichu in Peru in 2000, sailed the Atlantic Ocean on crew with a maxi-yacht in 2001, and ran the 2002 London Marathon. As an adult, Bruce studied classical ballet for 6 years and has performed in a handful of amateur productions. Bruce enjoys the discipline of learning the piano, and the joy of being a devoted husband and father to two young children.